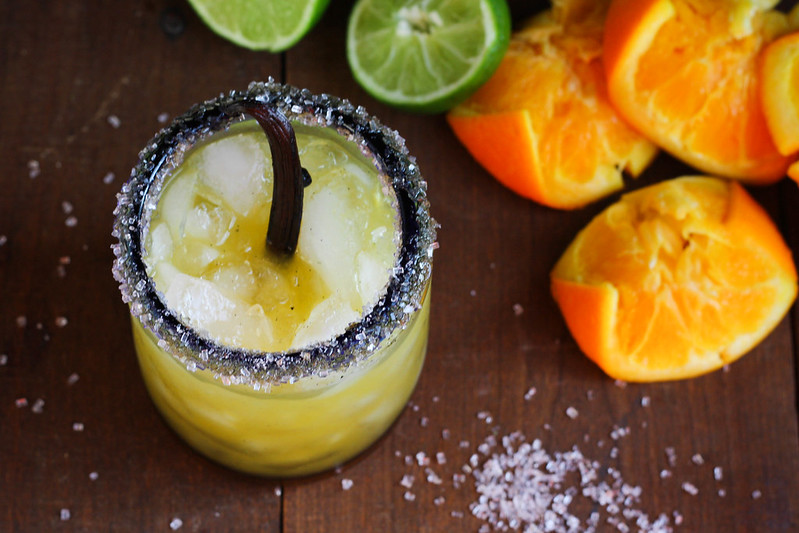 Cinco de Mayo is coming up this week, and Kate over at ¡Hola! Jalapeño is hosting a margarita roundup to celebrate!

As a Spanish teacher, I have always had mixed feelings about this holiday because so many students think it is a celebration of Mexico’s independence. However, Mexico celebrates its independence on September 16th! Cinco de Mayo is nothing more than a battle that was fought by the Mexicans against the French in the city of Puebla. Cinco de Mayo is not a national holiday in Mexico. In fact, it’s not really celebrated beyond the city of Puebla! So, how did this holiday become so important in the U.S.?

Well, it’s important to recognize the history behind the Battle of Puebla. It occurred on May 5, 1862. At this time, the U.S. was in the midst of its Civil War, and Mexico was defending its freedom from the French who had invaded. The French, who were led by Napoleon III, planned to occupy and control Mexico in order to offer aid to the U.S. Confederate Army. The Confederacy wanted France’s help in order to beat the Union Army. At this point in history, France had one of the strongest armies in the world.

On the morning of May 5th, the French army attacked the Mexicans at Puebla, a city located not very far from Mexico’s capital. The French expected an easy victory in hopes of reaching and controlling Mexico City quickly. The Mexican army, led by Ignacio Zaragoza, was very small and poorly equipped compared to its French counterparts. In fact, the army was mainly made up of campesinos or farmers who had nothing more than machetes as weapons. Amazingly, that small but mighty Mexican army beat the French that day at Puebla and in turn stopped the French from coming to the Confederacy’s aid. The Union was able to gain strength and eventually defeat the Confederates. Thanks to its southern neighbor, the U.S. was once again unified and free of slavery, and Mexico preserved its freedom.

Following the war, Latinos in California gave speeches every Cinco de Mayo to remind people of how the Battle of Puebla helped bring about abolition. These speeches turned into parades, and as more Mexicans migrated to the U.S., they joined in the celebrations. Over time, Cinco de Mayo became a way to recognize and honor Mexican ethnicity, and so this is why the holiday is celebrated in the U.S. more than it is in Mexico. It is very similar to how St. Patrick’s Day is celebrated more by Irish living in the U.S. than those living in Ireland. 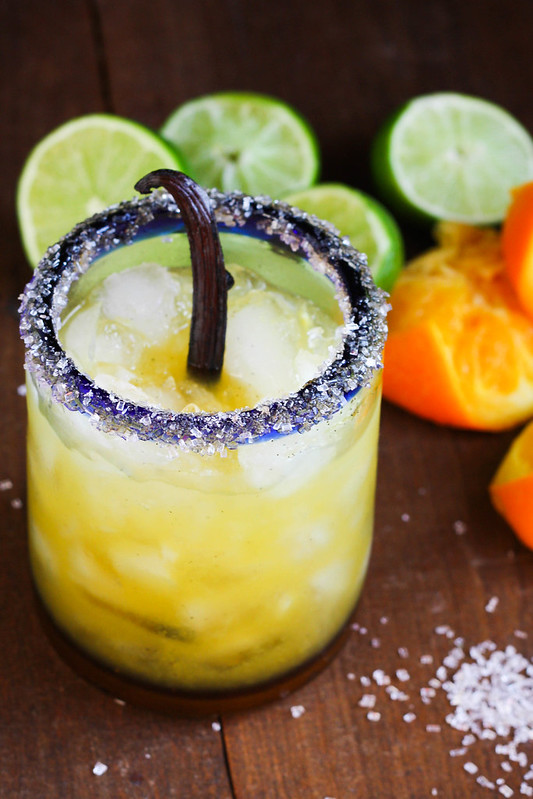 Now that you got your history lesson on Cinco de Mayo, the Spanish teacher in me feels satisfied, and we can move onto this margarita.

The margarita is the perfect drink to celebrate U.S.-Mexican friendship. The stories about the origin of the margarita differ, but my favorite one says that it was invented by a Mexican bar owner in Tijuana for an aspiring American actress. Actress Marjorie King often stopped at Danny Herrera’s Rancho La Gloria on her trips to Ensenada. She was allergic to all alcohol except for tequila and couldn’t drink it straight. So, Danny concocted this drink for Marjorie and named it after her. The Margarita was born. 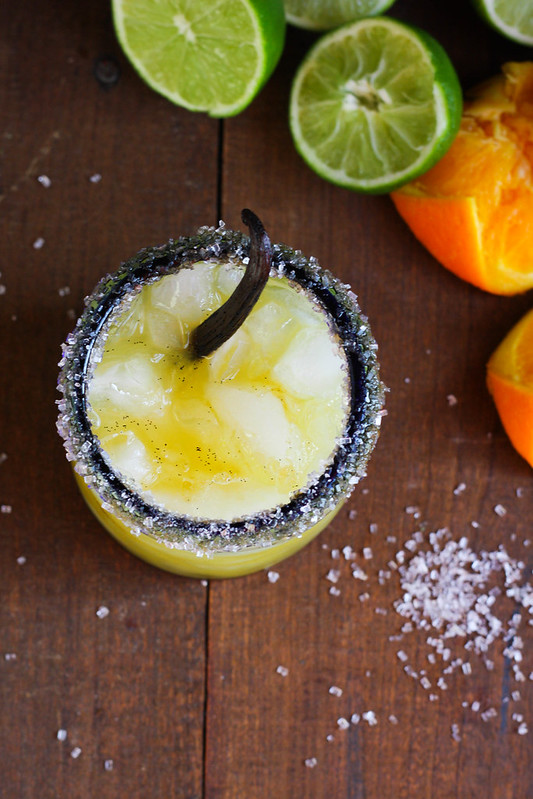 Today’s recipe puts an additional Mexican twist on the classic recipe by mixing in a piloncillo vanilla bean syrup to sweeten the drink. Piloncillo is an unrefined brown sugar that can readily be found at Latin grocery stores. It adds a warm, caramel undertone to the margarita and the addition of the vanilla bean complements the sweetness of the fresh-squeezed orange juice and rounds out the bite from the lime.

Although most margaritas are usually rimmed with salt, I like the addition of sparkling sugar to provide added crunch and sweetness. But my favorite part by far is the vanilla bean stirrer. What’s not to love about this whole ensemble?! 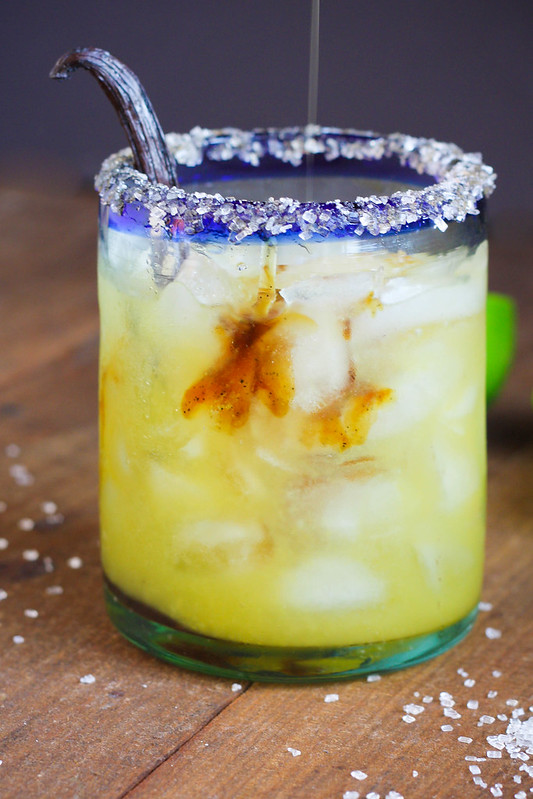 How do you plan to celebrate Cinco de Mayo?

→Put sugar, water, and vanilla beans in a small saucepan.

→Stir over medium-low heat until the sugar is dissolved. Bring to a boil and boil for 1 minute so that the syrup thickens slightly.

→Set aside to cool at room temperature.

→Mix the sparkling sugar and salt together on a shallow dish. Dip the rim of the margarita glass into the syrup and then roll in the sugar/salt mixture to coat.

→Stir together orange juice, lime juice, and tequila in a glass.

→Fill the rimmed margarita glass with ice. Top off with the margarita mixture and stir.

→Pour the vanilla syrup into the margarita so that it swirls to the bottom. Stir together with a vanilla bean. Enjoy!

This gordito is a month away from being 1! Haha, his birthday marks the very beginning of COVID quarantine. 🤪😬🥺😩
How are you already 10 months old, my little valentine?! ❤️
A last minute Rosca de Reyes thanks to the very talented @mexicanfoodmemories for the recipe to celebrate El Día de Reyes (Epiphany). I, of course added some vanilla bean (thanks @voladoresvanilla) to the topping because why not?! 😉 I didn't have a plastic baby to stick inside either, so I used a red bean. Feliz Día de Reyes 👑👑👑
You are my sunshine, my only sunshine 🌞 Eres mi tona, mi tonatiuh
A late night experiment with cacao beans from Oaxaca and Tabasco--first, I roasted the beans. Then, I hand-shelled each one to get the nibs. The house smells divine...like brownies baking in the oven. Tomorrow, I'll grind the nibs with sugar to make my own drinking chocolate. 🍫
Thankful for 8 months with our lil' turkey!