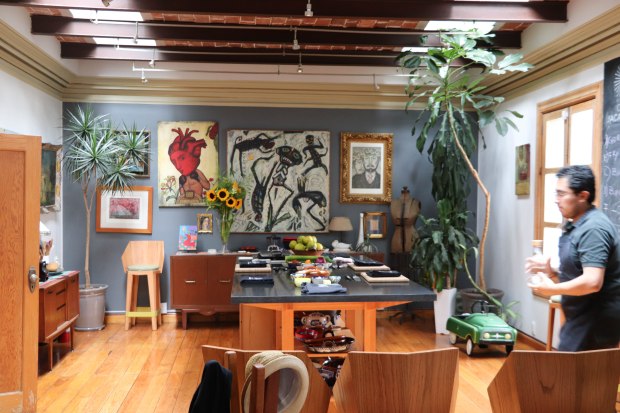 Inside the beautiful Casa Jacaranda

Today’s adventures began just a few blocks away from our AirBnB at a little café called Alelí. One of my favorite parts about staying in La Colonia Roma is that you discover a new little shop every time you turn the corner. Alelí is one of those cute cafés with pretty plates of many designs hanging along its wall, a collection of fun cushions on the long bench, and tables with chairs of different sizes and colors.

The breakfast menu was not super extensive, but all of the options looked delicious. I opted for the tosta dulce with pitaya (dragonfruit) and plum jam, a dish recommended by our waitress.

The bread was made fresh on site using a house sourdough, and it was toasted on a flattop grill to crisp it up. The fruit sauce was ladled over top and garnished with fresh blueberries. The sauce was tart and sweet and paired perfectly with the slightly crunchy grilled toast.

Tosta dulce with a pitaya-plum sauce and blueberries

After our breakfast, we headed to the Mercado de Medellín to meet up with our host, Beto, from Casa Jacaranda. In addition to Daniela and me, there were three other people in our group.

Beto began our class by explaining the history of this 130-year old market. It is officially called Mercado Melchor Ocampo, but everyone refers to it as the Mercado de Medellín because it’s located on Medellín Street. There are over 500 stalls in the market and more than 25 stands sell international products from countries like Colombia, Venezuela, Cuba, and Peru.

Beto proceeded to take us on an extensive tour of the market. He discussed the various types of Mexican chiles, took us to a artisan coffee stand to sample some brews, showed us a shop that makes flour tortillas (a common food in northern Mexico), had us taste three Mexican cheeses, and led us to a nearby stand that sold quesadillas and tlacoyos made with blue corn masa. 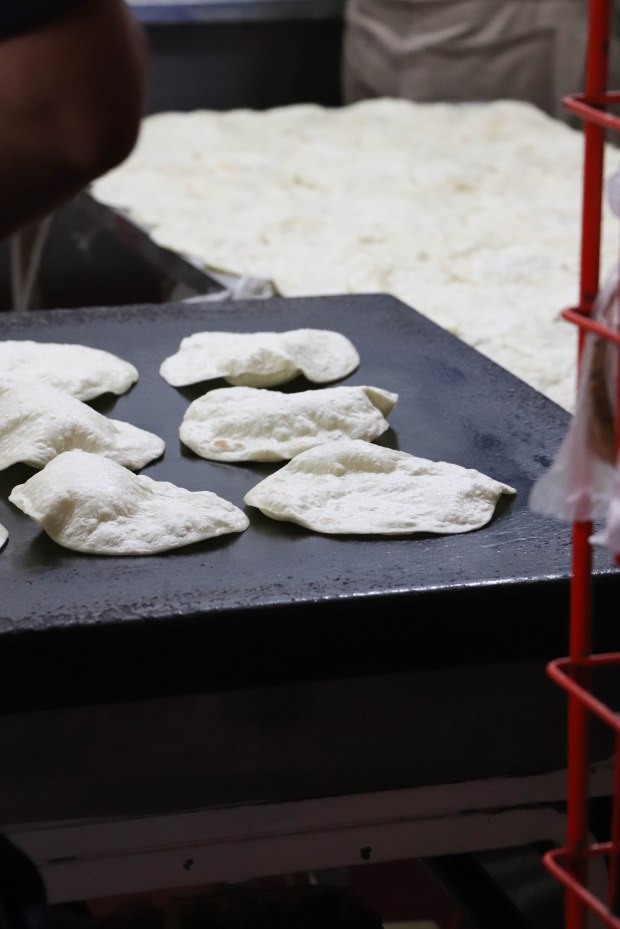 Flour tortillas (made with flour, water, lard, and salt) puffing up on the comal 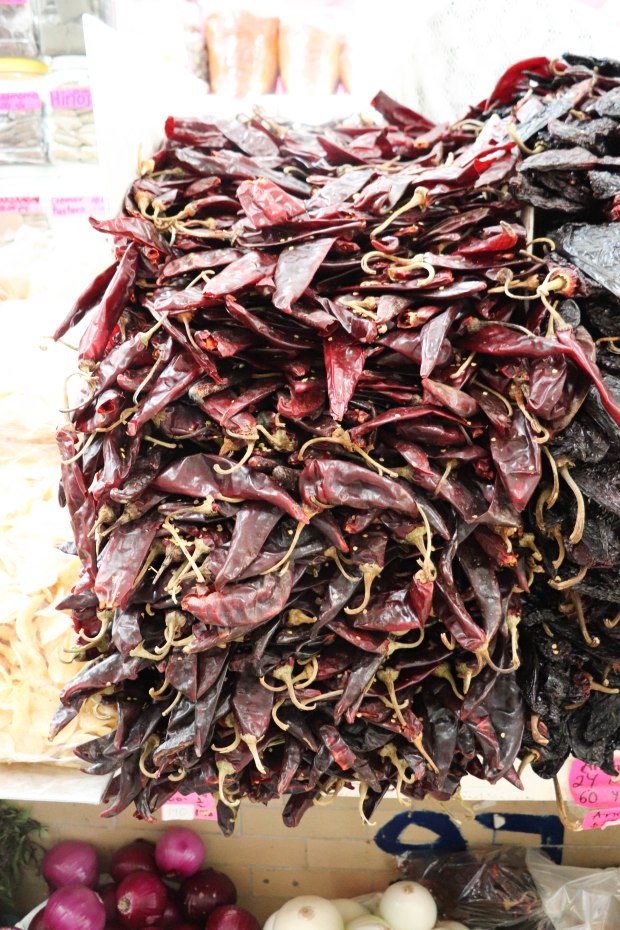 Stacks of chiles guajillos at the mercado 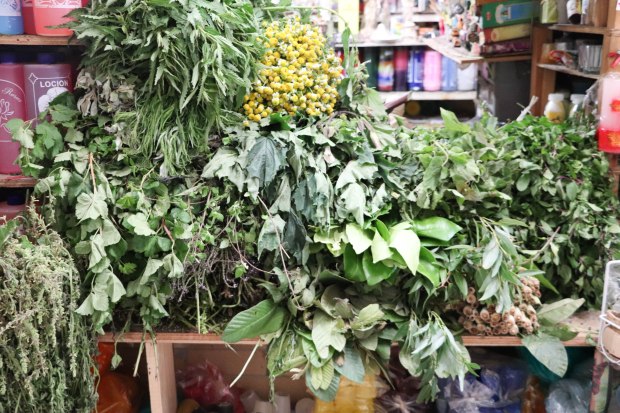 Quesadillas and tlacoyos made with blue corn masa

We also stopped at the Tortillería Maizajo, a local shop that makes its tortillas using real nixtamalized corn. Only about 30% of all of the tortillerías in Mexico still make their corn using the ancient process of nixtamalization (you can read all about that here). I had been wanting to visit this place for quite some time now, and I was so happy that it was a stop on our tour. Maizajo was started by three chefs as a way to preserve the variety of heirloom corn grown here in Mexico and to offer good quality tortillas to the public. I was immediately in my happy spot surrounded by that distinct smell of corn cooking on the comal.

Beto bought some fresh corn masa for us to use later on in our class.

A lineup of heirloom corn at Maizajo 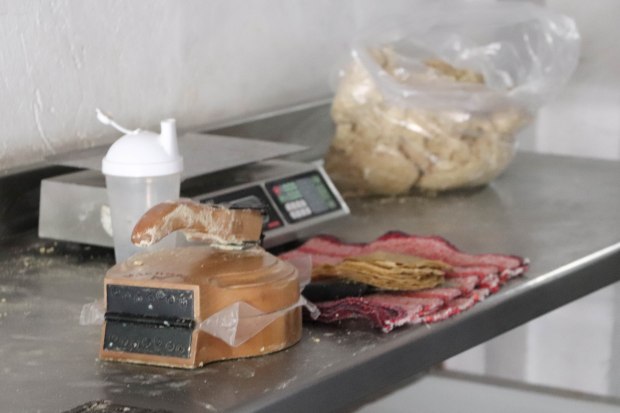 Tortilla press and bag of fresh nixtamalized masa at Maizajo 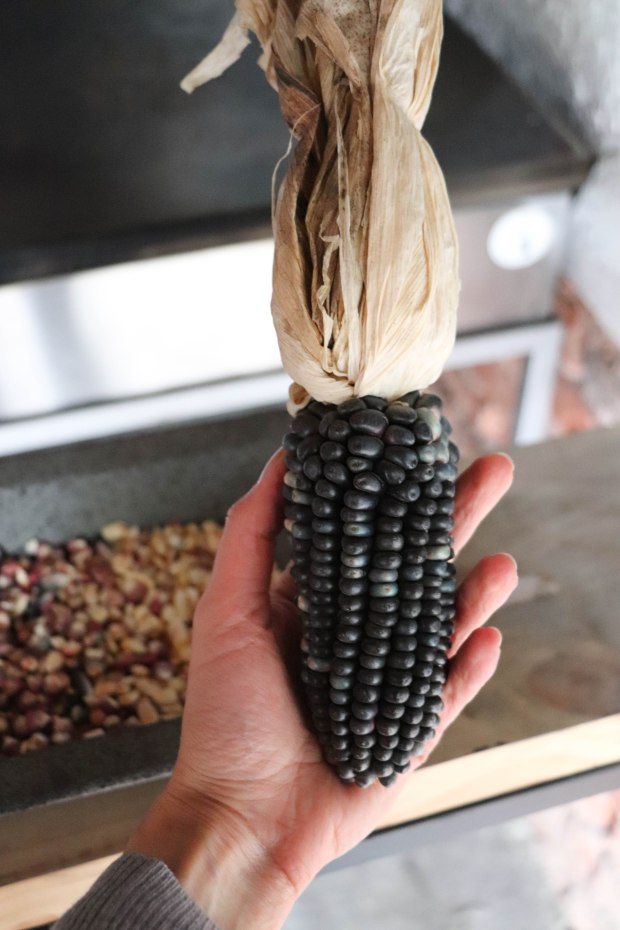 After we finished purchasing various ingredients at the market, Beto invited us back to his gorgeous house, la Casa Jacaranda, to begin the cooking class.

The tamales were wrapped in dried corn husks, then steamed for 45 minutes.

We topped them with cream, red salsa made in the molcajete, and queso cotija,

Ingredients for the fresh corn tamales

Masa for the fresh corn tamales

We also made three different types of salsas to add to various dishes like our sopes, tacos, and tamales. The first salsa was a lightly smokey red salsa made with charred ingredients in the molcajete. The second was a light and fresh green salsa made with tomatillos, cilantro, serrano, onion, and garlic. Beto referred to the third salsa as liquid fire because it was made with charred habaneros, onion, and garlic. I absolutely loved its super hot, charred flavor. 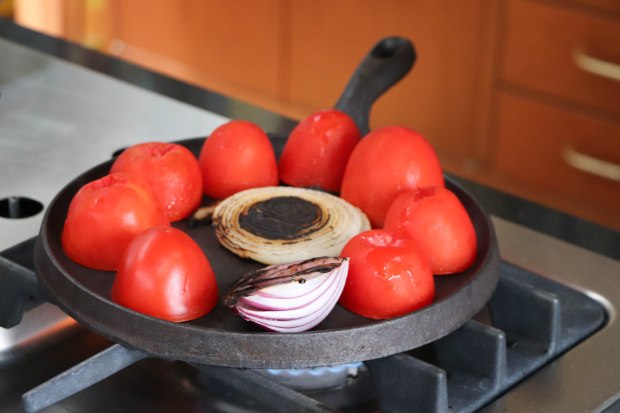 Charring the ingredients for the red salsa on the comal

Using our muscles to work that molcajete 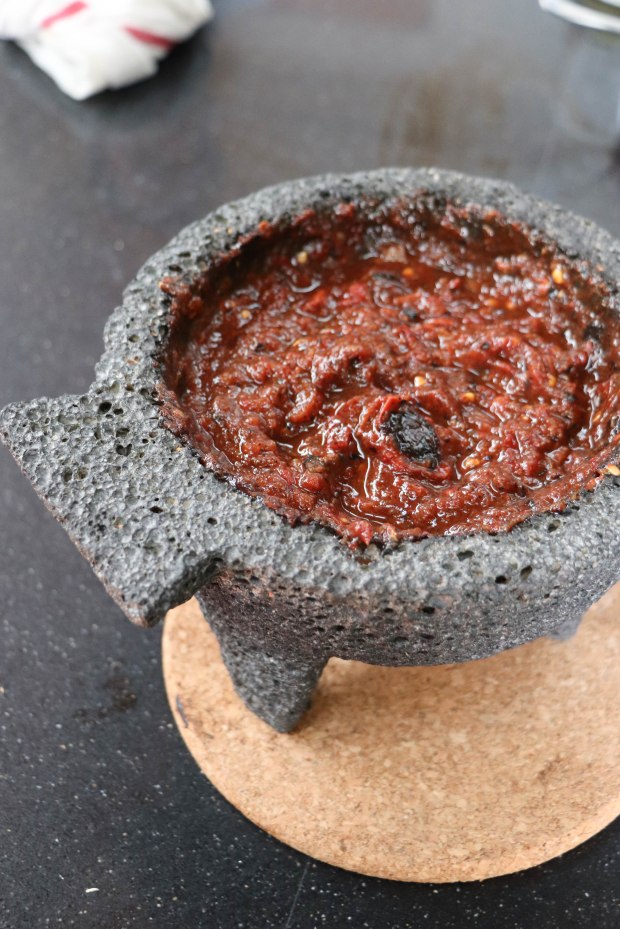 The black salsa in front is the liquid fire!

We used the fresh masa that we bought at the tortillería to make sopes, a type of thick tortilla with short walls around the edge.

Halfway though our cooking experience, Beto also made us all a delicious drink called a paloma. It contained fresh lime juice, agave nectar, fresh grapefruit juice, sparkling water, and tequila. (Of course, I had mine with double grapefruit juice instead of tequila). He rimmed the glasses with freshly picked pink peppercorn, salt, and lime juice and garnished it with fresh basil and a grapefruit slice. It was truly heavenly. 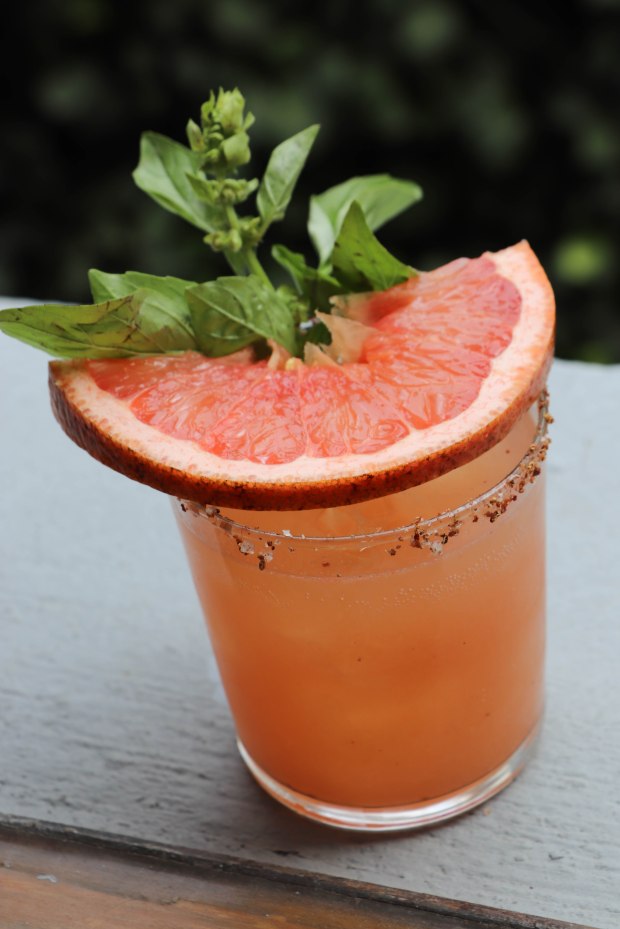 Our main course was tacos de cochinita pibil, a speciality from the Yucatán peninsula. Roberto and I ate some pretty delicious cochinita when we honeymooned in Mérida last year, but I might have to say that the recipe we made today was even more scrumptious.

The cochinita was made with pork shoulder, loin, and rib and marinated with a sauce of bitter orange juice, achiote paste, and vinegar. We covered it with fresh banana leaves and cooked it in the pressure cooker for 1.5 hours. Then we shredded it, and finally sauteed it with lard, red onion, and some cooking marinade.

The final tacos were served with refried black beans on corn tortillas and topped with crispy red onions that had been marinated in vinegar, water, and habanero chiles. We added some liquid fire salsa and a squeeze of lime juice. My favorite part of the whole presentation may of been the cut out banana leaf used to plate the dish. 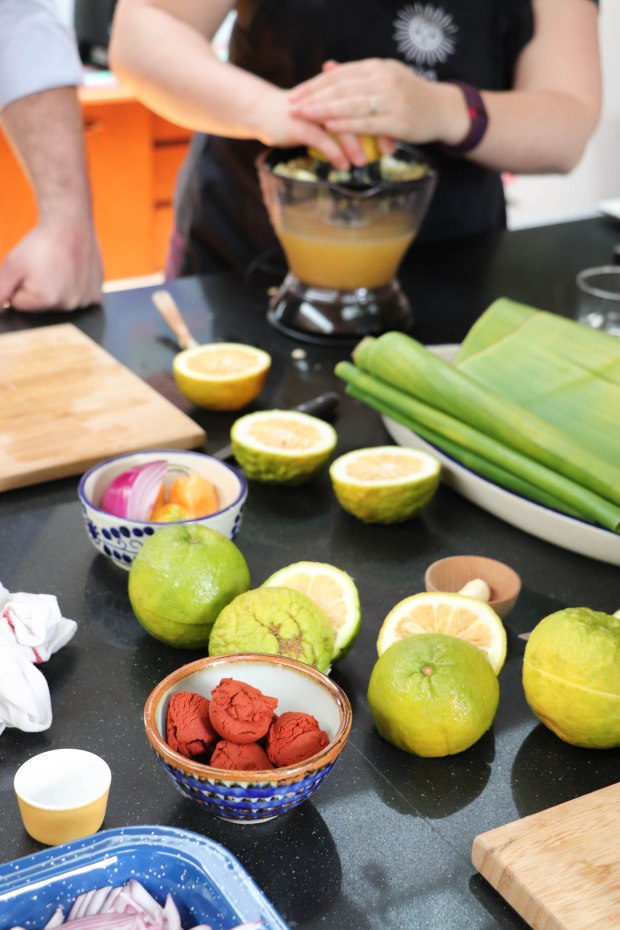 The pork in the achiote marinade

I’m sad to say that I completely forgot to take a picture of our dessert, but it was the most perfect way to end the meal. Beto served us a half a mango slice with homemade vanilla bean ice cream. It was a lovely ending to such an exquisite meal.

I was extremely impressed by Beto’s generosity, patience, kindness, sense of humor, and amazing personality. He invited us into his beautiful home, and I felt welcomed from the moment we stepped foot through the door. Beto speaks Spanish and English in such an elegant way, and I would highly recommend his tour and cooking class to anyone traveling to Mexico City. He was such an incredible host! 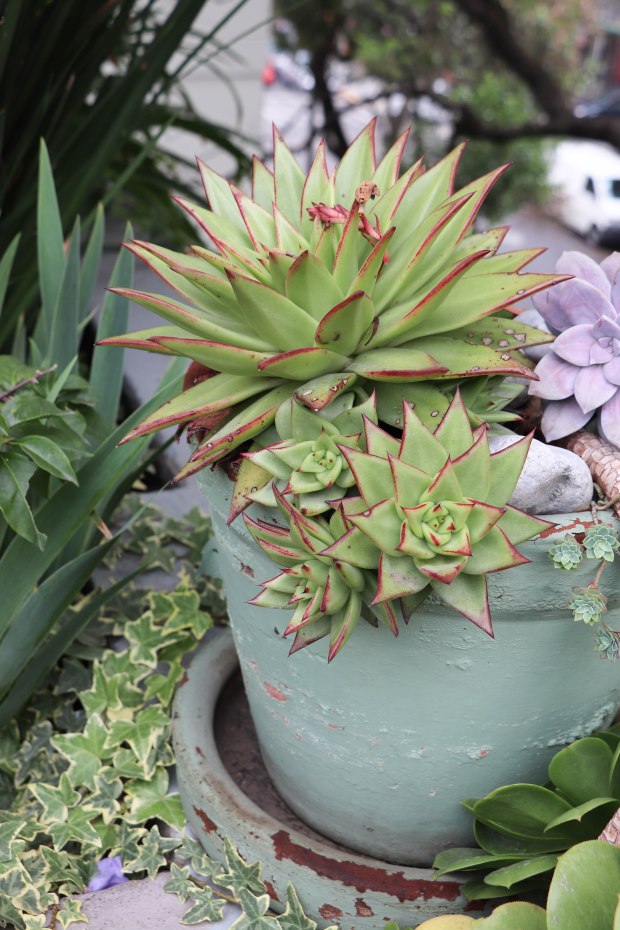 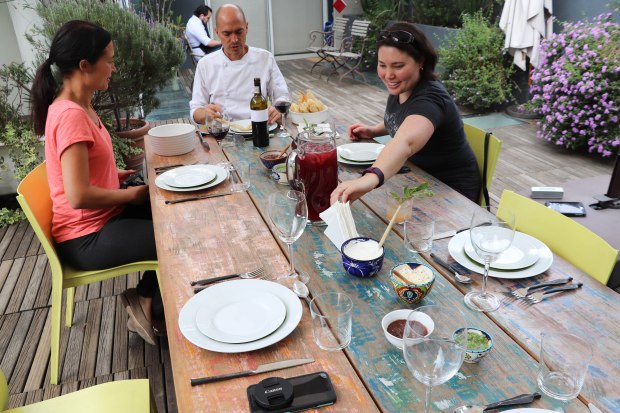 Sitting down to enjoy our meal